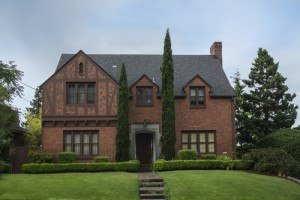 Westfield, New Jersey, is known throughout the region as “Colonial Westfield”, due to its large concentration of historically significant architecture.  Throughout town there are many examples of colonial architecture that reflect the cultural diversity of Westfield’s early residents.  Design elements such as English shingles, Dutch roofs, German stones, and Swedish planks can be found on just about every street, with many dating back to the 17th century.

While many neighborhoods in Westfield boast historically significant examples of architecture, no neighborhood embodies it as much as the Kimball Avenue Historic District.  This neighborhood is the only officially designated historic district in Westfield and offers a wonderfully historic overview of the architecture of the town throughout the centuries.  The district is comprised of the block between Lawrence Avenue and Elm Street.

The Kimball Avenue Historic District boasts many examples of Colonial Revivals.  Many of these structures feature classic steep gambrel roofs with flare cleaves overhanging the first floor, common in early Dutch Colonials.  The facades are often constructed with stucco and the roofs may feature a Bell curve, both characteristic of early Dutch design.

Another popular style found in the Kimball Avenue Historic District is Georgian.  This style originated in England in the 1600s and made its way to the colonies in the early 1700s.  The Faulkner House at 248 Kimball Avenue is a great example of a Georgian Revival.  The Kimball Avenue Historic District also features a number of Queen Anne style homes with turrets, latticework, multiple-gabled roofs and unique dormers.  The homes at 230, 237, 242, 243, 249, 257, 265, and 266 are all examples of Queen Anne style homes built between 1881 and the turn of the century.

Other Historic Neighborhoods in Westfield

While the Kimball Avenue Historic District is the only officially designated historic district in Westfield, several other neighborhoods offer historic charm, including:

Search All Homes What Is My Home Worth? View Our Exclusive Listings
Filed under Blog, Communities Tagged with