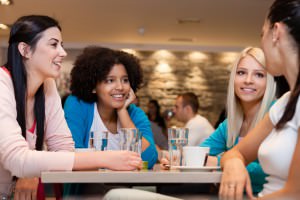 Just moved to Madison?  Wondering about the best local activities or where to find play dates for your kids?  What about a play date for YOU?  Moms need friends too!  The Madison Newcomers is a club for moms and women looking for new friends and women who share similar interests.  The group will share information on civic involvement, fun things to do around town, and be a general area of support for Madison moms – especially for those who are new in town.

Madison, New Jersey is a picturesque borough in Morris County.  Known as The Rose City, the village has a population of approximately 16,000 residents occupying 4.2 square miles.  It’s lovely quaintness is so picture perfect, it has even provided the backdrop for many film and television projects.  Television shows “The Sopranos”, “Friday Night Lights’ and “Pretty Little Liars” all shot scenes here.  The films “Rich and Famous”, “The World According to Garp”, “A Beautiful Mind”, “Guess Who” and “The Family Stone” also used Madison settings in their productions.  Madison’s Drew University, Fairleigh Dickinson University and Convent Station are some of the most popularly used locations.

New Jersey Transit’s Morristown Line services the community, making commuting to and from New York City a breeze.  The rail service through Madison has directly contributed to its growth and popularity for over a century.  After the Civil War, the railroad connected Madison to New York and gave rise to the industry that would give Madison its enduring nickname.  Rose growing blossomed in Madison and became a major attraction for horticulturists and others taking part in the floral business.

Nature will always play a major role in Madison.  The Robert and Florence Zuck Arboretum on the Drew University campus is a major draw.  The Arboretum incorporates two glacial ponds, a mix of native and introduced trees, and a variety of flowering plants and shrubs. Turtles, goldfish, catfish and muskrats make their homes in and around the ponds.  They also provide migratory stops for Canadian geese, ducks and herons.  It serves as an outdoor laboratory to enhance education and the Department of Biology routinely runs  experiments there.  The Arboretum is also open to the public for anyone to take advantage of the beautiful retreat.

Newcomers to Madison will find so much to love about their new home.

Search All HomesWhat Is My Home Worth?View Our Exclusive Listings
Filed under Blog, Madison Tagged with