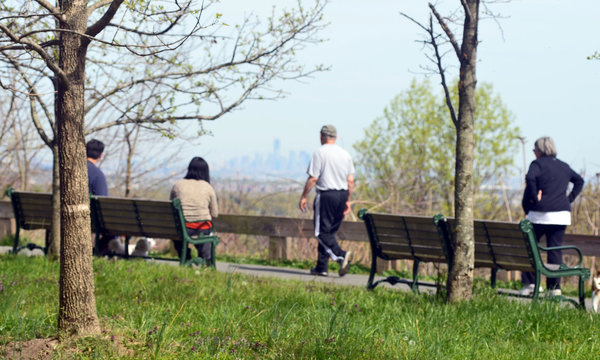 South Mountain Reservation is a 2000+ acre park located in Essex County bordering the towns of Millburn, South Orange and Maplewood. The hilly park follows along the ridge of the lower Watchung mountain range and offers many easy to moderate hiking options for those looking to get in a long day or just going out with the children. The 34 mile Lenape Trail (yellow blazes) runs the length of the park.

Carved from wilderness at the end of the 19th century by the Olmsted Brothers and developed over the last few decades, the reservation has changed only slightly through the years. Preserved primarily in its wild state, woodlands abound in a variety of hardwood trees, and tall hemlocks tower above streams, creeks and ponds, and waterfalls. Higher points offer vistas of New York and Jersey City skylines, Elizabeth, Union Township, and Staten Island.

Geographic highlights include two ponds along dammed sections of the Rahway River, Hemlock Falls and a few other smaller waterfalls, basalt rock formations, including the famous Turtle Back Rock, and various overlooks to the east with views of the Hudson River and New York City Skyline.

A favorite afternoon hike starts in the Tulip Springs parking area along Glen Avenue in Millburn, following the white blazed trail north along the Rahway River until it meets South Orange Avenue. After a short detour to see Hemlock Falls, the yellow or white and red blazes can be picked up and followed back south along the top of the ridge.

The South Mountain Conservancy is a non-profit organization that works within the park to support, protect and preserve the park. They run regular hikes, trail maintenance days, and forest regeneration, and native plant care taking.

Downloadable Trail Map from the Essex County web site, or purchase a trail map from SOMOCON at these locations.

In 1680, wolves, bears and cougars were observed in the area, and there was a bounty on them. John Durand, the son of Asher Brown Durand, described the mountain that includes South Mountain Reservation as

“a wilderness, as it probably existed at the time of Hendrick Hudson, a primitive forest abounding with deer and other wild animals, and traversed by streams alive with trout. Game was plentiful – partridges, quail, woodcock, rabbits, squirrels of every species, raccoons and foxes; while occasionally a hungry bear that had trespassed on the farmyards in the vicinity would be tracked to its den and shot.”

The reservation was built from land purchases that began in 1895. It took a decade to untangle the deeds and assemble all the lands at South Mountain. Before Frederick Law Olmsted delegated the design of Essex Parks to his stepson’s firm, he visited the newly acquired reservation. Olmsted regarded it as some of the most beautiful and promising terrain he had ever seen. The design of South Mountain was finalized by the Olmsted Brothers in stages over the years. A great deal of construction work such as trails, footbridges, and shelters, was carried out by the Civilian Conservation Corps in the 1930s.

Washington Rock is a Revolutionary War historic site, dating back to the late 18th century when Beacon Signal Station 9 was located here, one of 23 beacons built by General Washington to observe British troop movements quartered on Staten Island and New York City.

It was from this outlook that, on June 23, 1780, Essex County and Newark Militia were first warned that the British had launched an attack westward toward “the Gap,” (Hobart Gap), a natural pathway to Washington’s troops encamped at Morris Town. In a pincer movement designed to gain access to the Gap, Hessian troops fought bitterly along Vaux Hall Road, while the British advanced along Galloping Hill Road, until they were repelled, the Hessians at the base of the mountain and the British in Millburn—called Millville in those days. Washington Rock served again as a lookout for the Army when reactivated during the War of 1812.

Search All Homes What Is My Home Worth? View Our Exclusive Listings
Filed under All Midtown Direct Communities, Blog, Short Hills, South Orange Tagged with